If you're looking for cheap flights to Copenhagen you have reached your destination! Your journey to Copenhagen starts here - where we select and display the best offers of direct flights, low-cost connections from hundreds of airlines and partner agencies.

CPH is the short code of the city. The short address of this page is zbordirect.com/en/fly/CPH. Remember this short and simple address that will always guide you to best flight deals to Copenhagen in Denmark.

Originally a Viking fishing village established in the 10th century in the vicinity of what is now Gammel Strand, Copenhagen became the capital of Denmark in the early 15th century. Beginning in the 17th century, it consolidated its position as a regional centre of power with its institutions, defences, and armed forces. During the Renaissance the city served as the de facto capital of the Kalmar Union, being the seat of monarchy, governing the majority of the present day Nordic region in a personal union with Sweden and Norway ruled by the Danish monarch serving as the head of state. The city flourished as the cultural and economic center of Scandinavia under the union for well over 120 years, starting in the 15th century up until the beginning of the 16th century when the union was dissolved with Sweden leaving the union through a rebellion. After a plague outbreak and fire in the 18th century, the city underwent a period of redevelopment. This included construction of the prestigious district of Frederiksstaden and founding of such cultural institutions as the Royal Theatre and the Royal Academy of Fine Arts. After further disasters in the early 19th century when Horatio Nelson attacked the Dano-Norwegian fleet and bombarded the city, rebuilding during the Danish Golden Age brought a Neoclassical look to Copenhagen's architecture. Later, following the Second World War, the Finger Plan fostered the development of housing and businesses along the five urban railway routes stretching out from the city centre.

Since the turn of the 21st century, Copenhagen has seen strong urban and cultural development, facilitated by investment in its institutions and infrastructure. The city is the cultural, economic and governmental centre of Denmark; it is one of the major financial centres of Northern Europe with the Copenhagen Stock Exchange. Copenhagen's economy has seen rapid developments in the service sector, especially through initiatives in information technology, pharmaceuticals and clean technology. Since the completion of the Øresund Bridge, Copenhagen has become increasingly integrated with the Swedish province of Scania and its largest city, Malmö, forming the Øresund Region. With a number of bridges connecting the various districts, the cityscape is characterised by parks, promenades, and waterfronts. Copenhagen's landmarks such as Tivoli Gardens, The Little Mermaid statue, the Amalienborg and Christiansborg palaces, Rosenborg Castle, Frederik's Church, Børsen and many museums, restaurants and nightclubs are significant tourist attractions.

Movia is the public mass transit company serving all of eastern Denmark, except Bornholm. The Copenhagen Metro, launched in 2002, serves central Copenhagen. Additionally, the Copenhagen S-train, the Lokaltog (private railway), and the Coast Line network serve and connect central Copenhagen to outlying boroughs. Serving roughly 2.5 million passengers a month, Copenhagen Airport, Kastrup, is the busiest airport in the Nordic countries.

View all flight deals to CPH from CPH 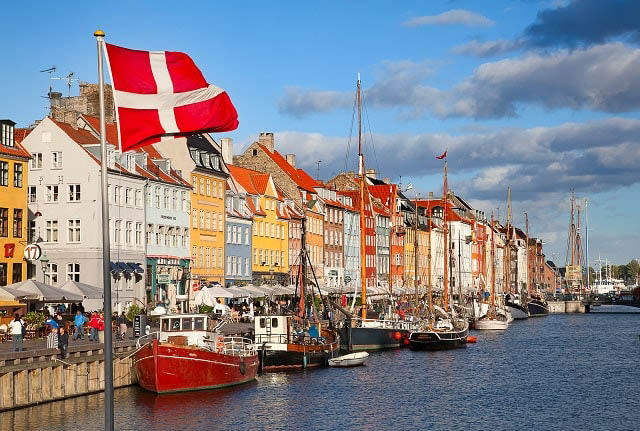