If you're looking for cheap flights to Esbjerg you have reached your destination! Your journey to Esbjerg starts here - where we select and display the best offers of direct flights, low-cost connections from hundreds of airlines and partner agencies.

EBJ is the short code of the city. The short address of this page is zbordirect.com/en/fly/EBJ. Remember this short and simple address that will always guide you to best flight deals to Esbjerg in Denmark.

Esbjerg (Danish: [ˈesˌpjɛɐ̯ˀ], West Jutish dialect: [ˈɛspʲæa̯]) is a seaport town and seat of Esbjerg Municipality on the west coast of the Jutland peninsula in southwest Denmark. By road, it is 71 kilometres (44 mi) west of Kolding and 164 kilometres (102 mi) southwest of Aarhus. With an urban population of 71,698 (1 January 2022) it is the fifth-largest city in Denmark, and the largest in West Jutland.

Before a decision was made to establish a harbour (now the second largest in Denmar…
Esbjerg (Danish: [ˈesˌpjɛɐ̯ˀ], West Jutish dialect: [ˈɛspʲæa̯]) is a seaport town and seat of Esbjerg Municipality on the west coast of the Jutland peninsula in southwest Denmark. By road, it is 71 kilometres (44 mi) west of Kolding and 164 kilometres (102 mi) southwest of Aarhus. With an urban population of 71,698 (1 January 2022) it is the fifth-largest city in Denmark, and the largest in West Jutland.

Before a decision was made to establish a harbour (now the second largest in Denmark) at Esbjerg in 1868, the area consisted of only a few farms. Esbjerg developed quickly with the population rising to 13,000 by 1901 and 70,000 by 1970. In addition to its fishing and shipping activities, it also became an important centre for agricultural exports. Over the years, many of the city's visitors have arrived by ferry from Harwich, Essex, England, but this service closed in September 2014 having run since 1875. The harbour facilities are being expanded to answer the needs of the wind-turbine industry and container shipping traffic. Esbjerg is served by Esbjerg Airport with flights to Aberdeen, Scotland and Stavanger, Norway.

The town has several notable museums and entertainment venues, including Esbjerg Art Museum, Esbjerg Museum and the privately owned Fisheries and Maritime Museum. The Esbjerg Performing Arts Centre was completed in 1997 to designs by Jan and Jørn Utzon. When approached by sea, the Man Meets the Sea is one of the prominent monuments, consisting of four 9-metre-tall (27 feet) white-coloured men, overlooking Sædding Beach. The sculpture was designed by Svend Wiig Hansen and installed in 1995. Esbjerg hosts branches of the University of Southern Denmark and Aalborg University, and is increasingly recognized for its university facilities and sporting activities. It is home to the Danish football club Esbjerg fB, who play their home matches at Blue Water Arena, and also has an ice hockey division called Esbjerg Elite Ishockey, which plays at the Granly Hockey Arena.

The town itself was not established until 1868 when it was built as a replacement for the harbour in Altona, which had previously been Denmark's most important North Sea port but came under German control after the Second Schleswig War in 1864. At the time, Esbjerg consisted of only a few farms. Developed under royal decree from 1868 until 1874, the harbour was officially opened in 1874, with rail connections to Varde and to Fredericia, an important hub on the east coast of Jutland. Initial planning of the town was conducted by chartered surveyor H. Wilkens in 1870 with streets laid out in the form of a rectangular grid. The market square (Torvet) was positioned at the centre, midway between the harbour and the railway station. From only 400 inhabitants at the beginning of the 1870s, the town and its population grew rapidly, with 1529 residents mentioned in 1880, and 4,211 in 1890.

In 1893, Esbjerg became a municipality in its own right (initially known as Esbjerg Ladeplads), receiving the status and privileges of a market town in 1899 and incorporating the parish of Jerne (east of the centre) in 1945. A number of institutions and facilities were soon established, including the courthouse and town hall (1891), the gas and waterworks (1896) and the power plant (1907). From the beginning of the 20th century, Esbjerg prospered not only as a fishing port but became one of the country's major export centres. Established in 1895 by nine local dairies, the butter-packaging factory, Dansk Andels Smørpakkeri, employed some 150 workers until 1920, packing and dispatching butter for the London market. It was later extended to include egg marketing under the name Dansk Andels Ægeksport. Ultimately, it handled produce from 140 dairies spread across the whole of Jutland. After the Second World War, the town developed several agricultural industries, especially meat processing and packaging with a plant employing over 300. The slaughterhouse and meat packaging facility, Esbjerg Andels-Slagteri, established in 1887, became Denmark's sixth largest by 1962. It later became part of Vestjyske Slagterier in 1986, and in 2001, it was acquired by Danish Crown.

Once Denmark's principal fishing port, the Port of Esbjerg is still a driving force for the town's economy. While it has a long history of ferry services to England, the town is by no means a tourist destination. Lonely Planet remarked that "nobody comes to Esbjerg for a holiday, in fact, as with many industrial ports, most visitors rush through as quickly as possible". Esbjerg is the main town for Denmark's oil and offshore activities, with companies like Maersk, Ramboll, Stimwell Services, ABB, Schlumberger, COWI and Atkins all having offshore-related activities in the town. Halliburton has an office in Esbjerg. The port has served the Danish offshore industry since oil and gas were first extracted from the North Sea in the early 1970s. More recently, it has become a centre for shipping offshore wind turbines. In addition to handling 65 percent of all Danish wind turbines, which supply 3 gigawatts (4,000,000 hp) of offshore wind power, components have been shipped to various British wind farms. In order to cope with enormous future increases in Danish offshore wind power, 12 companies, including DONG Energy and Bluewater Energy Services are already planning the establishment of a Green Offshore Centre in Esbjerg. In connection with this, in June 2013, the port was significantly expanded with the opening of the Østhavn (East Harbour), covering an area of 650,000 m2 (7,000,000 sq ft).Historically, in addition to its success as a fishing port, Esbjerg established its position as one of the country's major export centres. Before World War II, there was a large butter factory, Dansk Andels Smørpakkeri, employing some 150 workers while after the war the town developed agricultural industries, especially for meat processing and packaging with a plant employing over 300. Latterly owned by Danish Crown and employing 500, the plant closed in May 2012.More recently, Esbjerg has grown into an important centre for education with campuses belonging to the University of Southern Denmark (1998) and Aalborg University (1995). The town holds an annual music festival spanning two weekends (nine days) in mid-August. It is focused around the central Torvet Square which hosts the main stage. The music includes everything from church concerts to opera and pop. 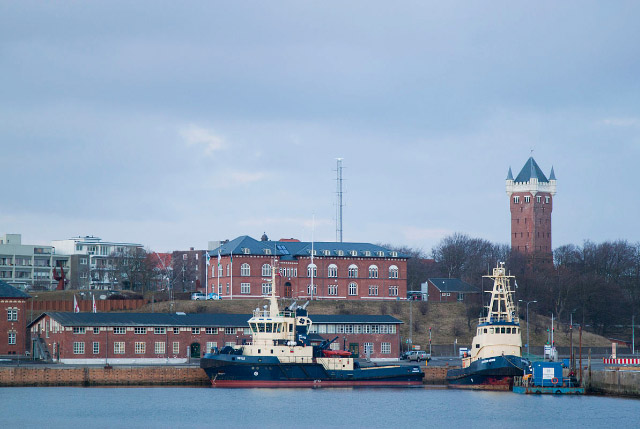