If you're looking for cheap flights to Frankfurt you have reached your destination! Your journey to Frankfurt starts here - where we select and display the best offers of direct flights, low-cost connections from hundreds of airlines and partner agencies.

FRA is the short code of the city. The short address of this page is zbordirect.com/en/fly/FRA. Remember this short and simple address that will always guide you to best flight deals to Frankfurt in Germany.

Frankfurt was a city state, the Free City of Frankfurt, for nearly five centuries, and was one of the most important cities of the Holy Roman Empire, as a site of Imperial coronations; it lost its sovereignty upon the collapse of the empire in 1806, regained it in 1815 and then lost it again in 1866, when it was annexed (though neutral) by the Kingdom of Prussia. It has been part of the state of Hesse since 1945. Frankfurt is culturally, ethnically and religiously diverse, with half of its population, and a majority of its young people, having a migrant background. A quarter of the population consists of foreign nationals, including many expatriates. In 2015, Frankfurt was home to 1909 ultra high-net-worth individuals, the sixth-highest number of any city.

Frankfurt is a global hub for commerce, culture, education, tourism and transportation, and rated as an "alpha world city" according to GaWC. It is the site of many global and European corporate headquarters. In addition, Frankfurt Airport is the busiest in Germany, one of the busiest in both Europe and the world, the airport with the most direct routes in the world, and the primary hub for Lufthansa, the national airline of Germany. Frankfurt is one of the major financial centers of the European continent, with the headquarters of the European Central Bank, Deutsche Bundesbank, Frankfurt Stock Exchange, Deutsche Bank, DZ Bank, KfW, Commerzbank, several cloud and fintech startups and other institutes. Automotive, technology and research, services, consulting, media and creative industries complement the economic base. Frankfurt's DE-CIX is the world's largest internet exchange point. Messe Frankfurt is one of the world's largest trade fairs. Major fairs include the Music Fair and the Frankfurt Book Fair, the world's largest book fair.

Frankfurt is home to influential educational institutions, including the Goethe University, the UAS, the FUMPA and graduate schools like the Frankfurt School of Finance & Management. Its renowned cultural venues include the concert hall Alte Oper, continental Europe's largest English theatre and many museums (e.g. the Museumsufer ensemble with Städel and Liebieghaus, Senckenberg Natural Museum, Goethe House and the Schirn art venue at the old town). Frankfurt's skyline, especially that of its central business district, is shaped by some of Europe's tallest skyscrapers, which has led to the term Mainhattan. The city is also characterised by various green areas and parks, including the central Wallanlagen, the City Forest, two major botanical gardens (the Palmengarten and the University's Botanical Garden) and the Frankfurt Zoo. In sports, the city is known as the home of the top-tier football club Eintracht Frankfurt, the Löwen Frankfurt ice hockey team, the basketball club Frankfurt Skyliners, the Frankfurt Marathon and the venue of Ironman Germany. It was also one of the host cities of the 1974 and 2006 FIFA World Cups.

View all flight deals to FRA from FRA 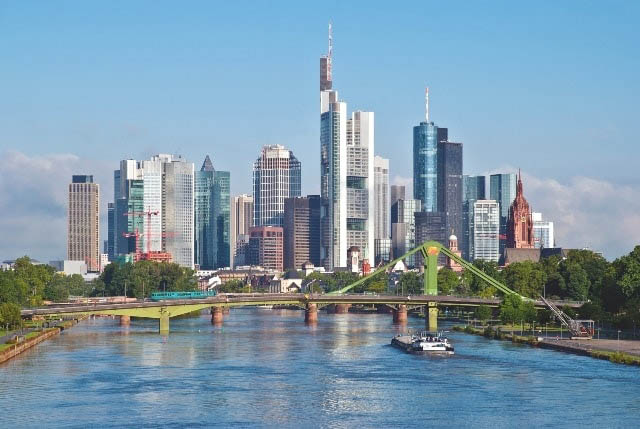