If you're looking for cheap flights to Stuttgart you have reached your destination! Your journey to Stuttgart starts here - where we select and display the best offers of direct flights, low-cost connections from hundreds of airlines and partner agencies.

STR is the short code of the city. The short address of this page is zbordirect.com/en/fly/STR. Remember this short and simple address that will always guide you to best flight deals to Stuttgart in Germany.

Stuttgart is unusual in the scheme of German cities. It is spread across a variety of hills (some of them covered in vineyards), valleys (especially around the Neckar river and the Stuttgart basin) and parks. The city is known as the "cradle of the automobile". As such, it is home to famous automobile museums like the Mercedes-Benz Museum and Porsche Museum, as well as numerous auto-enthusiast magazines, which contributes to Stuttgart's status as Germany's "Autohauptstadt" ("car capital city"). The city's tourism slogan is "Stuttgart offers more". Under current plans to improve transport links to the international infrastructure (as part of the Stuttgart 21 project), Stuttgart unveiled a new city logo and slogan in March 2008, describing itself as "Das neue Herz Europas" ("The new Heart of Europe"). For business, it describes itself as "Where business meets the future". In July 2010, the city unveiled a new logo, designed to entice more business people to stay in the city and enjoy breaks in the area.Since the 7th millennium BC, the Stuttgart area has been an important agricultural area and has been host to a number of cultures seeking to utilize the rich soil of the Neckar valley. The Roman Empire conquered the area in AD 83 and built a massive castrum near Bad Cannstatt, making it the most important regional centre for several centuries. Stuttgart's roots were truly laid in the 10th century with its founding by Liudolf, Duke of Swabia, as a stud farm for his warhorses. Initially overshadowed by nearby Bad Cannstatt, the town grew steadily and was granted a charter in 1320. The fortunes of Stuttgart turned with those of the House of Württemberg, and they made it the capital of their county, duchy, and kingdom from the 15th century to 1918. Stuttgart prospered despite setbacks in the Thirty Years' War and devastating air raids by the Allies on the city and its automobile production during World War II. However, by 1952, the city had bounced back and became the major economic, industrial, tourism and publishing centre it is today.Stuttgart is known for its strong high-tech industry, especially in the automotive sector. It has the highest general standard of prosperity of any German city. In addition to many medium-sized companies, several major corporations are headquartered in Stuttgart, including Porsche, Bosch, and Mercedes-Benz Group. Stuttgart is an important financial center; the Stuttgart Stock Exchange is the second largest in Germany (after Frankfurt), and the Landesbank Baden-Württemberg (LBBW) is Germany's largest Landesbank. Stuttgart is also a major transport junction; it is among the most congested conurbations of Europe, and its airport is the sixth-busiest in Germany (2019). Stuttgart is a city with a high number of immigrants; according to Dorling Kindersley's Eyewitness Travel Guide to Germany, "In the city of Stuttgart, every third inhabitant is a foreigner." 40% of Stuttgart's residents, and 64% of the population below the age of five, are of immigrant background.

View all flight deals to STR from STR 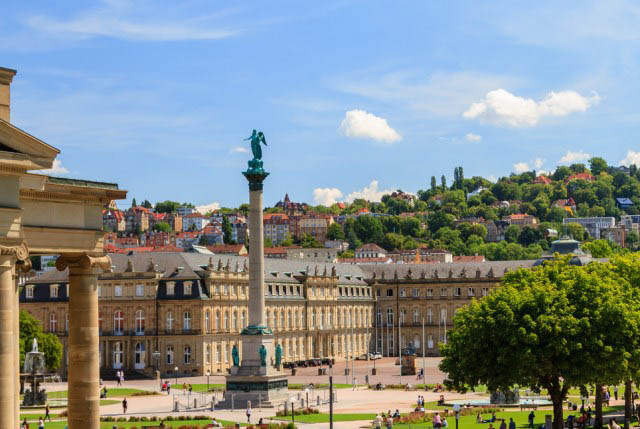